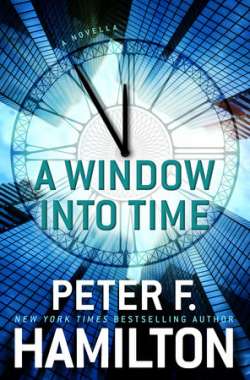 A Window into Time (Novella)

A profound, poignant, mind-blowing trip into time and consciousness awaits in this ebook original novella from New York Times bestselling author Peter F. Hamilton. In the vein of Life After Life, Hamilton’s bold speculations into the nature of life—and what comes after—make for riveting, provocative fiction.

Whip-smart thirteen-year-old Julian Costello Proctor—better known as Jules—has an eidetic memory. For as long as he can remember, he has remembered everything. “My mind is always on,” he explains. But when an unexpected death throws his life into turmoil, Jules begins to experience something strange. For the first time, there are holes in his memory.

But that’s not the strangest part. What’s really weird isn’t what he’s forgotten; it’s what he remembers. Memories of another life, not his own. And not from some distant past. No, these memories belong to a man who’s alive right now.

With bravery, ingenuity, and quirky good humor, Jules devises a theory to explain this baffling phenomenon. While tracking down the identity of his mysterious doppelgänger, he finds himself enmeshed in the hopes and dreams of a stranger . . . and caught in the coils of a madman’s deadly plot.

“The owner of the most powerful imagination in science fiction, author of immense, complex far-future sagas.”—Ken Follett

“The clear heir to Heinlein, in my view.”—Marc Andreessen, co-founder, Netscape

“The author’s mastery of the art of the ‘big story’ earns him a place among the leading authors of dynastic SF.”—Library Journal