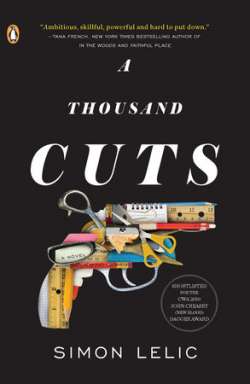 It should be an open-and-shut case. Samuel Szajkowski, a recently hired history teacher, walked into a school assembly with a gun and murdered three students and a colleague before turning the weapon on himself. It was a tragedy that could not have been predicted. Szajkowski, it seems clear, was a psychopath beyond help. Yet as Detective Inspector Lucia May- the only woman in her high-testosterone office in the Criminal Investigations Department-begins to piece together the testimonies of the various witnesses, an uglier and more complex picture emerges, calling into question the innocence of others. But no one, including Lucia's boss, is interested.

As the pressure to close the case builds and her colleagues' sexism takes a sinister turn, Lucia begins to realize that she has more in common with the killer than she could have imagined, and she becomes deter­mined to expose the truth. Brilliantly interweaving the witnesses' accounts with Lucia's own perspective, A Thousand Cuts is a narrative tour de force from a formidable new voice in fiction.