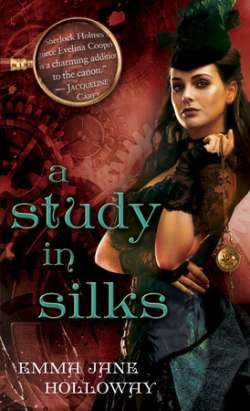 A Study in Silks

Evelina Cooper, the niece of the great Sherlock Holmes, is poised to enjoy her first Season in London Society. But there’s a murderer to deal with—not to mention missing automatons, a sorcerer, and a talking mouse.

In a Victorian era ruled by a council of ruthless steam barons, mechanical power is the real monarch and sorcery the demon enemy of the Empire. Nevertheless, the most coveted weapon is magic that can run machines—something Evelina has secretly mastered. But rather than making her fortune, her special talents could mean death or an eternity as a guest of Her Majesty’s secret laboratories. What’s a polite young lady to do but mind her manners and pray she’s never found out?

But then there’s that murder. As Sherlock Holmes’s niece, Evelina should be able to find the answers, but she has a lot to learn. And the first decision she has to make is whether to trust the handsome, clever rake who makes her breath come faster, or the dashing trick rider who would dare anything for her if she would only just ask.

Praise for A Study in Silks

“In A Study in Silks, Emma Jane Holloway has created a wonderful reimagining of the Sherlock Holmes mythos set in a late-Victorian Britain ruled by nefarious industrial titans called steam barons. Holloway’s clever writing, attention to detail, and sublime characters forge a fascinating world that combines brass-plated steampunk technology with magic. By turns a coming-of-age story, a gas-lamp thriller, and a whimsical magical fantasy, A Study in Silks is the premiere novel of an author to watch.”—Susan Griffith, author of the Vampire Empire series

“Holloway stuffs her adventure with an abundance of characters and ideas and fills her heroine with talents and graces, all within a fun, brisk narrative.”—Publishers Weekly

“Splendid . . . The characters are thoroughly charming and the worldbuilding is first-rate.”—RT Book Reviews (four stars)