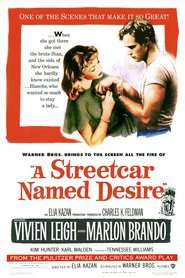 A Streetcar Named Desire is the film adaptation from the play by Tennessee Williams and directed by Elia Kazan. The film tells the drama story of the conflict between run down southern states and the exemplary industrial states in the north. Disturbed Blanche DuBois moves in with her sister in New Orleans and is tormented by her brutish brother-in-law while her reality crumbles around her.

How To Watch A Streetcar Named Desire