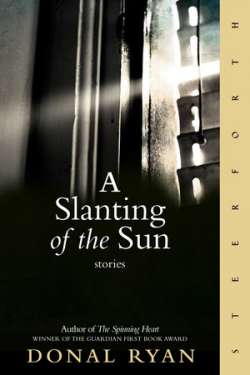 A Slanting of the Sun

Donal Ryan's short stories pick up where his acclaimed novels The Spinning Heart and The Thing About December left off, dealing with dramas set in motion by loneliness and displacement and revealing stories of passion and desire where less astute observers might fail to detect the humanity that roils beneath the surface. Sometimes these dramas are found in ordinary, mundane situations; sometimes they are triggered by a fateful encounter or a tragic decision. At the heart of these stories, crucially, is how people are drawn to each other and cling to love when and where it can be found.

In a number of the these stories, emotional bonds are forged by traumatic events caused by one of the characters - between an old man and the frightened young burglar left to guard him while his brother is beaten; between another young man and the mother of a girl whose death he caused when he crashed his car; between a lonely middle-aged shopkeeper and her assistant. Disconnection and new discoveries pervade stories involving emigration (an Irish priest in war-torn Syria) or immigration (an African refugee in Ireland). Some of the stories are set in the same small town in rural Ireland as the novels, with names that will be familiar to Ryan's readers.

In haunting prose, Donal Ryan has captured the brutal beauty of the human heart in all its failings, hopes and quiet triumphs.