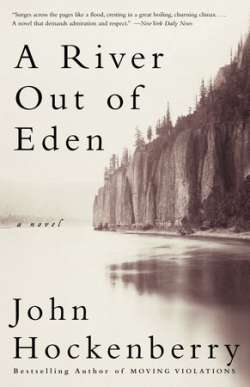 A River Out of Eden

On a night of torrential rain, a warrior appears near the Colombia River, where the Chinook people thrived before the hydroelectric dams came and changed their entire way of life. He has come to reclaim the river, to return it to its original majesty.

Soon after, government employees are found murdered with elaborate harpoons. As the body count grows, Francine Smohalla, a government marine biologist of Chinook and white descent, embarks on her own investigation of the bizarre murders. As she desperately tries to find the killer and prevent any other murders, she finds herself spinning in the convergence of ethnic hatreds between Indians and whites, an unlikely relationship with a kindred spirit whose troubled life has led him to contemplate terrorism and apocalypse, an ancient prophecy about the return of her beloved salmon, and the giant dams on the Columbia that loom large and as seemingly immovable as the mountains themselves. A River Out of Eden is a gripping literary thriller straight from today’s headlines set against the uniquely American contradictions of the Pacific Northwest.