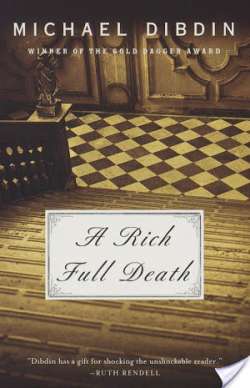 Florence,1855. "The English are dying too much," the city's police chief observes. And members of the foreign community in this quaint Italian backwater, both English and American, are indeed dying at an alarming rate and in an extraordinary variety of ingenious and horrible ways. With the local authorities out of their depth, the distinguished resident Robert Browning launches his own private investigation, aided and abetted by an expatriot Robert Booth. Unfortunately, their amateur sleuthing is hampered by the fact that each of their suspects becomes the next victim in a series of murders orchestrated by a killer with a taste for poetic justice. A Rich Full Death features characters both historical and imaginary, ranging from an enticing servant girl to Mr. Browning's consumptive, world-famous wife, Elizabeth Barrett, in a tale lush with period detail, intricately plotted, and with a truly astonishing final twist.