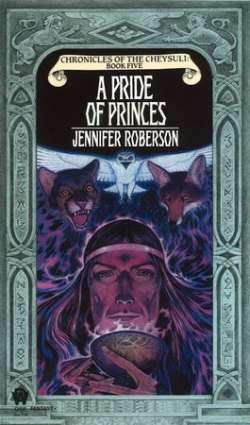 A Pride of Princes

Brennan, Hart and Corin were the three Cheysuli sons of Niall, ruler of Homana, and the next link in the generations-old prophecy of the Firstborn. Now the time had come for all three to take the paths for which they were fated:

Brennan, heir to the throne of Homana, would face the menance of unknown assassins and trecherous Ihlini magic.

Hart, Brennan's younger twin, must journey to Solinde, the kingdom which would one day be his to rule—a land that longed to see the Cheysuli prince overthrown.

And Corin, the youngest prince, must battle sorcery and madness in the court of distant Atvia.

Three princes, three destinies—and if even one should fail to fulfill the patterns of prophecy, Homanan and Cheysuli alike would pay a deadly price...