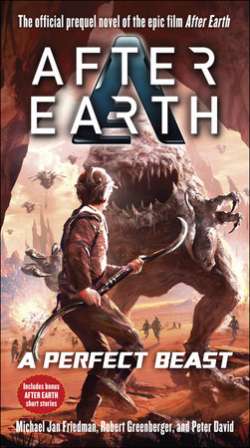 The official prequel novel of the epic film After Earth, directed by M. Night Shyamalan and starring Jaden Smith and Will Smith

After their exodus from Earth, the last humans settled a remote planet, Nova Prime. When an alien force known as the Skrel descended from the skies, the United Ranger Corps, an elite defense unit, valiantly resisted. Centuries passed without an attack, and many colonists believed that, with other security measures in place, the resources devoted to maintaining their military strength would be better spent elsewhere. Little did they know that trouble was coming to Nova Prime—and it had a taste for blood.

The latest in a long line of decorated warriors, Conner Raige is one of the Rangers’ most promising young cadets, although his brash confidence and tendency to act on instinct have earned him as many skeptics as admirers. Conner’s ancestors were on the front lines of humanity’s victory against the Skrel. But when a deadly ground war breaks out, Conner’s up against an entirely different beast—because, this time, the Skrel have brought a secret weapon: ferocious killing machines designed to eliminate humanity from Nova Prime . . . and the universe.

From the Paperback edition.