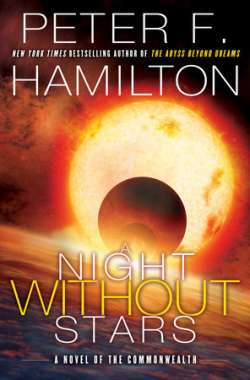 A Night Without Stars

Bestselling author Peter F. Hamilton returns to his acclaimed Commonwealth series in this thrilling follow-up to The Abyss Beyond Dreams. Featuring Hamilton’s trademark blend of intricate plotting, riveting suspense, high-concept science, and vivid characters, A Night Without Stars brings the story to a fully satisfying finish.

After centuries trapped inside the Void, the planet Bienvenido—along with its inhabitants, both human and Faller—has been expelled into normal space. But the survivors are millions of light-years from the Commonwealth, which knows nothing of their existence. As the two races plunge into mortal conflict for sole possession of the planet, the humans seem destined to lose—despite the assistance of the mysterious Warrior Angel, who possesses forbidden Commonwealth technology.

With the Fallers’ numbers growing, and their ability to mimic humans allowing them to infiltrate all levels of society, it’s only a matter of time before they surge to victory. Then, on a routine space flight, Major Ry Evine inadvertently frees a captive vessel that crash-lands on Bienvenido carrying the last, best hope for human survival: a baby. But a far from ordinary one.

The child not only ages at a remarkable rate but demonstrates knowledge and abilities far beyond those of Bienvenido’s humans. Hunted by Fallers and humans alike, she is a crucial link to humanity’s lost past—and a glorious future already almost out of reach.

Praise for A Night Without Stars

“Roars relentlessly along in utterly mesmerizing style, with edge-of-the-seat plotting, thrilling action, and knife-edge tension that will leave readers gasping. An atomic blast of a yarn. Hamilton in peak form and absolutely not to be missed.”—Kirkus Reviews (starred review)

“[An] interstellar adventure with espionage, old-style space exploration, and the story of a fugitive who carries the hope of salvation.”—Publishers Weekly

“An action-packed page-turner . . .  It’s a joy to witness such a master of science fiction at work.”—SFFWorld

Praise for Peter F. Hamilton’s The Abyss Beyond Dreams

“The work of an author at the top of his game.”—SFFWorld