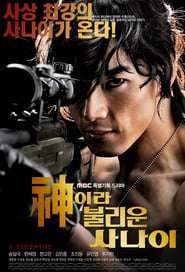 A man named Choi Kang-Ta (Song Il-Kook) gains powers similar to a God. As a child he lost his parents and became adopted by American parents. He returns to Korea to exact revenge on the murderer of his father. Kang-Ta learns that four people are responsible for the death of his father. While carrying out his plans he is betrayed by his partner Vivian (Han Go Eun). He is then nursed back to health by Jin Bo-Bae (Han Chae-Young), a woman he met by coincidence. After Kang-Ta recovers he settles down in a slum neighborhood and finds peace with the residents and himself. But, peace doesn't last long as Korean CIA official Hwang Woo-Hyun (Kim Min-Jong) is filled with jealousy that Kang-Ta has stolen Bo-Bae. Hwang Woo-Hyun then orders the death of Kang-Ta...

How To Watch A Man Called God