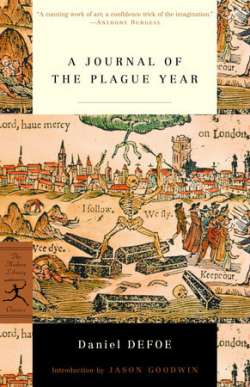 A Journal of the Plague Year

Defoe's account of the bubonic plague that swept London in 1665 remains as vivid as it is harrowing. Based on Defoe's own childhood memories and prodigious research, A Journal of the Plague Year walks the line between fiction, history, and reportage. In meticulous and unsentimental detail it renders the daily life of a city under siege; the often gruesome medical precautions and practices of the time; the mass panics of a frightened citizenry; and the solitary travails of Defoe's narrator, a man who decides to remain in the city through it all, chronicling the course of events with an unwavering eye. Defoe's Journal remains perhaps the greatest account of a natural disaster ever written.

This Modern Library Paperback Classic is set from the original edition published in 1722.