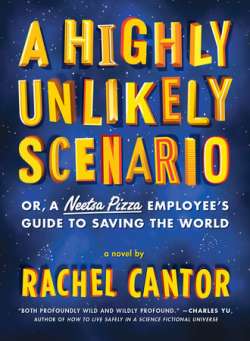 A Highly Unlikely Scenario, or a Neetsa Pizza Employee's Guide to Saving the World

"Cosmic and comic, full of philosophy, mysticism and celestial whimsy. Both profoundly wild and wildly profound."
—Charles Yu, author of How to Live Safely in a Science Fictional Universe

In the not-too-distant future, competing giant fast food factions rule the world. Leonard works for Neetsa Pizza, the Pythagorean pizza chain, in a lonely but highly surveilled home office, answering calls on his complaints hotline. It’s a boring job, but he likes it—there’s a set answer for every scenario, and he never has to leave the house. Except then he starts getting calls from Marco, who claims to be a thirteenth-century explorer just returned from Cathay. And what do you say to a caller like that? Plus, Neetsa Pizza doesn’t like it when you go off script.

Meanwhile, Leonard’s sister keeps disappearing on secret missions with her “book club,” leaving him to take care of his nephew, which means Leonard has to go outside. And outside is where the trouble starts.

A dazzling debut novel wherein medieval Kabbalists, rare book librarians, and Latter-Day Baconians skirmish for control over secret mystical knowledge, and one Neetsa Pizza employee discovers that you can’t save the world with pizza coupons.