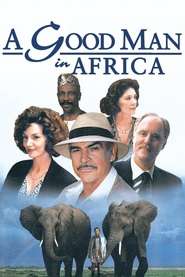 A Good Man in Africa

Morgan Leafy is a secretary to the British High Commissioner to an Africa nation. Leafy is a man that makes himself useful to his boss, the snobbish Arthur Fanshawe, who has no clue about what's going on around him, but who wants to use his secretary to carry on his dirty work, which involves getting one of the most powerful men in the country to do business with his country.The young secretary has an eye for beautiful women around him, especially Hazel, a native beauty, with whom he is having an affair. Things get complicated because Sam Adekunle, a man running for president of the country, wants a favor from Leafy in return after he has accepted the invitation to visit London. The proposition involves swaying a prominent doctor's opposition to a plan that will make Adenkule filthy rich.

How To Watch A Good Man in Africa