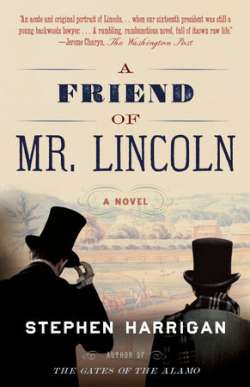 A Friend of Mr. Lincoln

The author of the best-selling The Gates of the Alamo now gives us a galvanizing portrait of Abraham Lincoln during a crucially revealing period of his life, the early Springfield years, when he risked both his sanity and his ethical bearings as he searched for the great destiny he believed to be his.

It is Illinois in the 1830s and 1840s. Abraham Lincoln is a circuit-riding lawyer, a member of the state legislature, a man of almost ungovernable ambition. To his friends he is also a beloved figure, by turns charmingly awkward and mesmerizingly self-possessed—a man of whom they, too, expect big things. Among his friends and political colleagues are Joshua Speed, William Herndon, Stephen Douglas, and many others who have come to the exploding frontier town of Springfield to find their futures.

It is through another friend, a fictional poet, Cage Weatherby, that we will come to know Lincoln in his twenties and thirties, as a series of formative, surprising incidents unfolds—his service in the Black Hawk War, his participation in a poetry-writing society, a challenge to a duel that begins as a farce but quickly rises to lethal potential . . . Cage both admires and clashes with Lincoln, sometimes questioning his legal ethics and his cautious stance on slavery. But he is by Lincoln’s side as Lincoln slips back and forth between high spirits and soul-hollowing sadness and depression, and as he recovers from a disastrous courtship of one woman to marry the beautiful, capricious, politically savvy Mary Todd. It is Mary who will bring stability to Lincoln’s life, but who will also trigger a conflict that sends the two men on very different paths into the future.

Historically accurate, rich in character, filled with the juice and dreams and raw ambitions of Americans on the make in an early frontier city, A Friend of Mr. Lincoln is a revelatory and moving portrayal of Abraham Lincoln in his young manhood. It is a close-up, involving experience, the sort of vibrant glimpse beneath the veneer of history that only the very best fiction can provide.