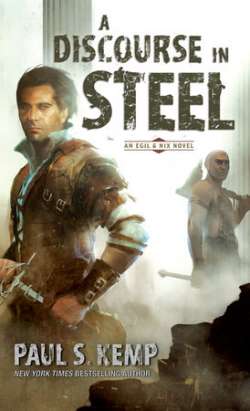 A Discourse in Steel

Once the most daring—some would say reckless—grave robbers around, Egil and Nix are now retired, having opened their own tavern with a side business as a brothel. The warrior-priest and the dashing rogue are done with adventuring. But is adventuring done with them? When two beautiful sisters run afoul of the notorious Thieves’ Guild, the semi-respectable entrepreneurs are called upon to defend their honor. And if they find an opportunity to enrich themselves along the way, no one could blame them.

Soon they’re going toe-to-toe and hammer-to-skull with some of the deadliest cutthroats in town. There’s just one catch: The quest to settle this vendetta once and for all leads straight into the Blackalley, a ghostly byway that appears at random to suck unsuspecting passersby into its voracious maw. Only a fool or a madman would enter willingly. Luckily for Egil and Nix, they might just be both.

Praise for the Egil and Nix novels

“[Paul S.] Kemp delivers sword and sorcery at its rollicking best, after the fashion of Fritz Leiber’s Fafhrd and the Gray Mouser.”—Library Journal

“Egil and Nix might not be the safest guys to go adventuring with, but they’re sure good company.”—Ed Greenwood, bestselling creator of Forgotten Realms

“Did I mention how much fun Egil and Nix are? So. Much. Damn. Fun.”—Tor.com