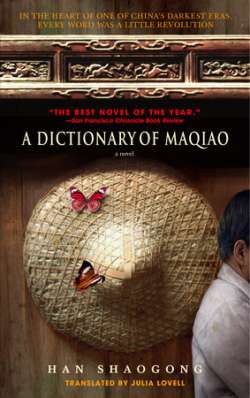 From the daring imagination of one of China’s greatest living novelists comes a work of startling power and originality–the story of a young man “displaced” to a small village in rural China during the 1960s. Told in the format of a dictionary, with a series of vignettes disguised as entries, A Dictionary of Maqiao is a novel of bold invention–and a fascinating, comic, deeply moving journey through the dark heart of the Cultural Revolution.
Entries trace the wisdom and absurdities of Maqiao: the petty squabbles, family grudges, poverty, infidelities, fantasies, lunatics, bullies, superstitions, and especially the odd logic in their use of language–where the word for “beginning” is the same as the word for “end”; “little big brother” means older sister; to be “scientific” means to be lazy; and “streetsickness” is a disease afflicting villagers visiting urban areas. Filled with colorful characters–from a weeping ox to a man so poisonous that snakes die when they bite him–A Dictionary of Maqiao is both an important work of Chinese literature and a probing inquiry into the extraordinary power of language.