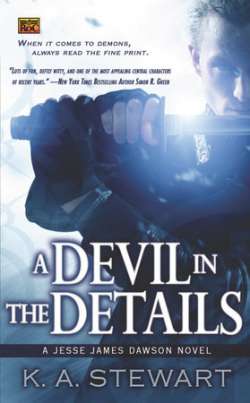 A Devil in the Details

View our feature on K.A. Stewarts’s A Devil in the Details.

When it comes to demons, always read the find print.

Jesse James Dawson was an ordinary guy (well, an ordinary guy with a black belt in karate) until one day he learned his brother had made a bargain with a demon, Jesse discovered there was only one way to save his brother: put up his own soul as collateral, and fight the demon to the death.

Jesse lived to free his brother-and became part of a loose organization of Champions who put their own souls on the line to help those who get in over their heads with demons. But now experienced Champions are losing battles at a much higher rate than usual. Someone has changed the game. And if Jesse can't figure out the new rules, his next battle may be his last...