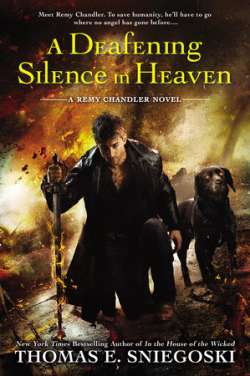 A Deafening Silence In Heaven

He was once known as the angel Remiel. But, generations ago, Boston PI Remy Chandler renounced Heaven and chose to live on Earth, hiding among us humans, fighting to save our souls…

Remy Chandler is hovering on the brink of death, surrounded by friends who are trying to ward off those who would take advantage of his vulnerability. Unbeknownst to them, the greatest threat to Remy is one they can’t fight—God himself. The Almighty dispatches Remy far beyond their reach, to an alternate universe where there has been an apocalyptic catastrophe: the Unification.

Only as he hunts down the source of this calamity, it becomes clearer and clearer that the person responsible for the tragedy may have been none other than Remy himself.

And while he searches for a way to stop his world from following in the footsteps of the doomed alternate reality, enemies are massing in his universe. For the Unification is at hand and, this time, Remy may be powerless to affect its outcome…