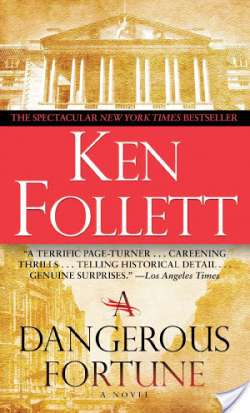 A breathtaking thriller featuring "political and amorous intrigues, cold-blooded murder, and financial crises" (San Francisco Chronicle), from the #1 New York Times bestselling author of A Column of Fire In 1866, tragedy strikes the exclusive Windfield School when a young student drowns in a mysterious accident. His death and its aftermath initiate a spiraling circle of treachery that will span three decades and entwine many lives. From the exclusive men’s clubs and brothels that cater to every dark desire of London’s upper class to the dazzling ballrooms and mahogany-paneled suites of the manipulators of the world’s wealth, one family is splintered by a shared legacy. But greed, fed by the shocking truth of a boy’s death, must be stopped, or the dreams of a nation will die. Praise for A Dangerous Fortune “A terrific page-turner.”—Los Angeles Times “Political and amorous intrigues, cold-blooded murder, and financial crises . . . old-fashioned entertainment.”—San Francisco Chronicle “Breathlessly plotted . . . relentlessly suspenseful.”—The New York Times “Gripping, complex plot . . . sexual intrigue . . . fascinating characters . . . You won’t be able to put down this exciting page-turner.”—Lexington Herald-Leader “Follett [builds] to a dramatic climax with the same masterful control that guided Eye of the Needle and The Pillars of the Earth.”—Playboy “I don’t usually enjoy historical thrillers but admit to being totally captivated by Ken Follett’s A Dangerous Fortune.”—Chicago Tribune “Highly entertaining . . . Follett’s characters are drawn with broad, realistic strokes . . . this story of greed and retribution should win Follett new fans.”—Publishers Weekly “Rich, complex, thrilling, suspenseful, well plotted . . . A Dangerous Fortune is dangerous reading. You won’t be able to put it down.”—Authors and Critics