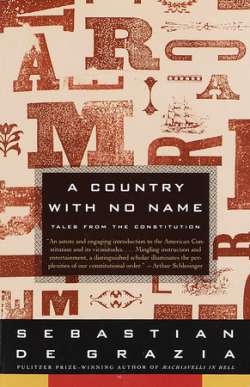 A Country with No Name

In an imaginative and masterful work of history, Pulitzer Prize-winner Sebastian de Grazia has created two memorable characters. Nineteen-year-old Oliver Huggins is in for the tutorial of his life. For twelve afternoons, Claire St. John, a beguiling British graduate student, will reveal to him the untold story of American Constitutional history. Her means: the Socratic method. Her message: that the Constitution was itself unconstitutional, and that its authors' inability to choose a name for the republic muddied the document's meaning for the future ahead.
Through these "tutorials" de Grazia passes in review our most revered heroes—Jefferson, Washington, Marshall, Lincoln, and Thoreau—revealing the complexity of their characters. St. John's unsettling tales arouse more in her disciple than intellectual curiosity. Their relationship unrolls in so humorous and seductive a way that only a musty academic could object. Satirical, intelligent, and sure-handed, A Country with No Name combines history and literature, politics and law to reinvigorate our best traditions.