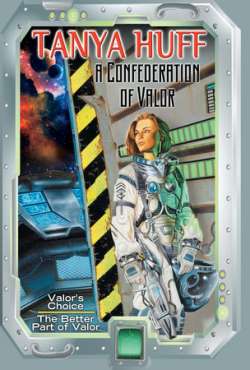 A Confederation of Valor

In Valor's Choice, Staff Sergeant Torin Kerr and her crew get yanked from a well-deserved shore leave in order to participate in an “easy” mission. They are to act as an honor guard for a diplomatic visit to the world of the Silsviss, reptilian aliens with a strong appreciation for war and conquest. Ideally, the visit will result in an alliance and a new member world for the Confederation. Sure, there'd been rumored sightings of the Others on the planet, sworn enemies of the Confederation, but there are always rumors. Everything seems to be going perfectly. Maybe too perfectly...

In The Better Part of Valor, Torin Kerr's outspokenness gets her in a load of trouble. After she tells a two-star general what she really thinks of him, she finds herself separated from her platoon and sent off on a perilous assignment. She's ordered to escort a scientific expedition to an unidentified alien ship abandoned in space -- is it a trap set by the Others or simply a derelict? It's Torin's job to find out -- and to babysit a commanding officer who might prove more of a menace to the mission's success than anything they encounter.