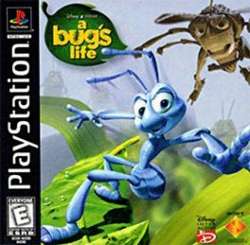 A Bug's Life is a video game based on the Disney/Pixar film of the same name. It was released for various systems in 1998 and in 1999. The game's storyline is similar to that of the movie, with a few changes. After completing levels the player can unlock real clips from the movie. Its Game.com, Sega Saturn, and Dreamcast versions were cancelled. Though the film was Roddy McDowall's final theatrical performance, the game was his final work before his death.