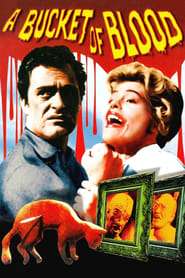 A Bucket of Blood

Nerdy Walter Paisley (Dick Miller), a maladroit busboy at a beatnik café who doesn't fit in with the cool scene around him, attempts to woo his beautiful co-worker, Carla (Barboura Morris), by making a bust of her. When his klutziness results in the death of his landlady's cat, he panics and hides its body under a layer of plaster. But when Carla and her friends enthuse over the resulting artwork, Walter decides to create some bigger and more elaborate pieces using the same artistic process.