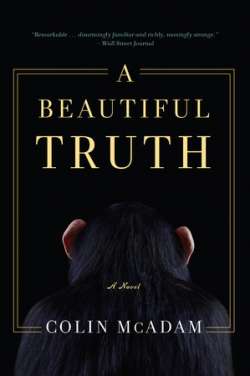 Told simultaneously from the perspective of humans and chimpanzees, set in a Vermont home and a Florida primate research facility, A Beautiful Truth—at times brutal, other times deeply moving—is about the simple truths that transcend species, the meaning of family, the lure of belonging, and the capacity for survival.

Looee, a chimp raised by a well-meaning and compassionate human couple who cannot conceive a baby of their own, is forever set apart. He's not human, but he is certainly no longer like other chimps. And then one night, after years at the family's Vermont home, their unique family life is changed forever.

At the Girdish Institute, a group of chimpanzees has been studied for decades. There is proof that chimps have memories and solve problems, that they can learn language and need friends. They are political, altruistic, get angry, and forgive. Mr. Ghoul has been there from the beginning, and has grown up in a world of rivals, sex, and unpredictable loss.

Looee and Mr. Ghoul travel distant but parallel paths through childhood, adolescence, and early middle age until Looee, who endures the darker side of Girdish, ends up meeting his kindred spirit long after he moves from Vermont.