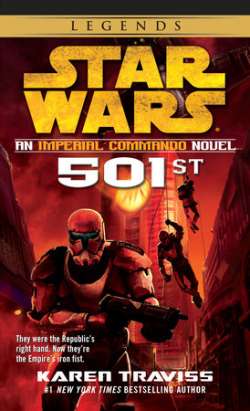 The Clone Wars are over, but for those with reason to run from the new galactic Empire, the battle to survive has only just begun. . . .

The Jedi have been decimated in the Great Purge, and the Republic has fallen. Now the former Republic Commandos–the galaxy’s finest special forces troops, cloned from Jango Fett–find themselves on opposing sides and in very different armor. Some have deserted and fled to Mandalore with the mercenaries, renegade clone troopers, and rogue Jedi who make up Kal Skirata’s ragtag resistance to Imperial occupation. Others–including men from Delta and Omega squads–now serve as Imperial Commandos, a black ops unit within Vader’s own 501st Legion, tasked to hunt down fugitive Jedi and clone deserters. For Darman, grieving for his Jedi wife and separated from his son, it’s an agonizing test of loyalty. But he’s not the only one who’ll be forced to test the ties of brotherhood. On Mandalore, clone deserters and the planet’s own natives, who have no love for the Jedi, will have their most cherished beliefs challenged. In the savage new galactic order, old feuds may have to be set aside to unite against a far bigger threat, and nobody can take old loyalties for granted.