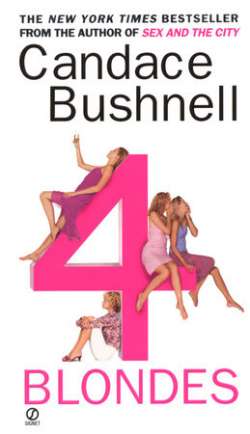 Candace Bushnell created a sensation with her first book, Sex and the City, spawning an HBO series that has become a phenomenon. With her sharp insight and uncensored observations of the mating rituals of the Manhattan elite, Bushnell has become a celebrity in her own right—on television, on the newsstands, and in bookstores across the globe.

In a new collection of stories, 4 Blondes, the romantic intrigues, betrayals, victories, and insecurities of four modern women are told with Bushnell's keen wit and sardonic eye. A beautiful B-list model in "Nice N'Easy" attaches herself yearly to the man with the largest summer house in the Hamptons, but she soon realizes that snagging a rich man and living in a fancy beach house won't necessarily bring her happiness. In "Highlights (for Adults)," a high-powered magazine columnist doesn't feel that she needs a man; an examination of her deteriorating marriage shows that her literary journalist husband could never live up to her sexual or emotional expectations. Too many expectations overwhelm Princess Cecilia in "Platinum"; her marriage to "the world's most eligible bachelor" leads to a descent into paranoia that she chronicles in her journal. And in "Single Process," an aging "It girl" worries that she is getting too old to meet a local eligible bachelor, so she travels to London in search of a husband, where she makes pithy observations about the differences between British and American men.

Once again, Bushnell returns to the land of the pretty and the powerful, breaking down bedroom doors with her wry humor and frank portrayals of love and lust among the "It people."