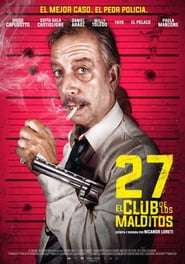 One night in the hottest summer in 20 years, Leandro De La Torre, famous punk singer, shoots out of a window and hits the roof of a car. It is the day of his 27th birthday. Paula, a young fan of twenty-one years old, records everything with her cell phone. Far from knowing that in that video is the key behind the murder of the musician. Martín Lombardo, a staunch supporter of Racing, is the detective in charge of investigating the case. Along with Paula you will discover the conspiracy behind the deaths of all famous rockers at 27 years old. Jimi Hendrix, Janis Joplin, Amy Winehouse, Sid Vicious and Leandro De La Torre have a lot in common: in fact, they were all murdered. Paula and Lombardo can be the following. Persecutions, impossible action scenes and completely unexpected twists make up the plot of 27.