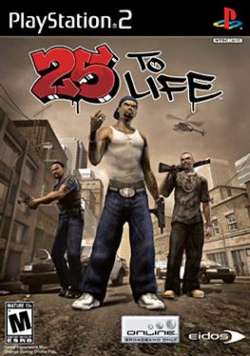 25 To Life is a third-person shooter video game. Set in a modern environment, the game allows the player to play as both a cop and a gangster, at different times, in a "cops and robbers" style game. The game can be played online with up to 16 players using the network adaptor for the PS2 and through Xbox Live for Microsoft's Xbox, and there is online play for the PC version as well. In addition, the game features a variety of hip hop songs playing in the background. The name of the game comes from a typical "indeterminate life sentence" that is often given in the United States upon a defendant's conviction for a violent felony. See the article on parole for more information.