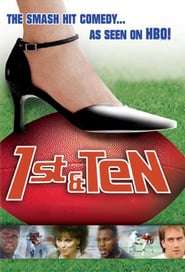 1st & Ten is an American situation comedy that aired between December 1984 and January 1991 on the cable television network HBO. Featuring series regulars Delta Burke and veteran Reid Shelton, it was one of cable's first attempts to lure the lucrative sit-com audience away from the "Big Three", by taking advantage of their freedom to include occasional cursing and nudity.