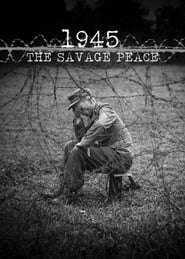 The Savage Peace reveals the appalling violence meted out to the defeated, especially to those ethnic Germans who had lived peacefully for centuries in neighbouring countries. Using rare and unseen archive film, the documentary tells a harrowing story of vengeance against German civilians, which mirrored some of the worst cruelty of the Nazi occupiers during the years of war. The Savage Peace includes the unique testimony of eyewitnesses and victims, who recall the horrors with searing clarity, their memories undimmed 70 years after the events took place. This a story that has, until now, been untold amidst the justified celebration of an end to an unspeakable tyranny. But as the writer George Orwell said, the treatment of the defeated Germans was a terrible crime that has gone unpunished.