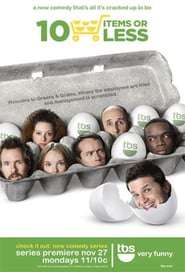 10 Items or Less is a partly scripted, partly improvised American comedy series created by Nancy Hower, Robert Hickey and John Lehr. It starred Lehr as a less-than-successful businessman who returned home to run Greens & Grains, the family-owned supermarket, upon the death of his father. The series debuted on TBS on November 27, 2006. During its first season, the program aired Monday nights at 11 p.m. ET/PT. The second and third seasons aired on TBS Tuesday nights at 11 p.m. ET/PT. In November 2009, a blog posting stated the show had been cancelled, and would not be picked up for the fourth season.