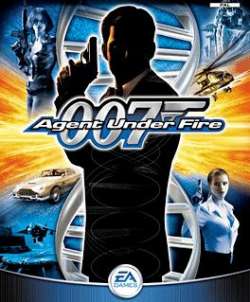 007: Agent Under Fire is the first James Bond game to appear on the PlayStation 2, GameCube, and Xbox. The game casts the player as the legendary James Bond who must accomplish missions throughout different areas of the world. Bond is sent on a mission rescue Zoe Nightshade, a CIA agent in the hands of Nigel Bloch. Nigel Bloch is the CEO of Identicon, a section of a highly successful industry company known as Malprave industries. Bond is also tasked to retrieve the set of DNA samples that are in Identicon's hands. So James Bond sets off on another adventure... The game combines three game modes into one package: first-person-shooter, which is what most of the missions are, a rail-shooter, where the player only controls firing, and a driving game, where the player drives one of the many Bond cars. Numerous weapons have been added to the series, along with some fictional weapons like the Photon cannon and the 5-way grenade launcher. The player can utilize a wide array of gadgets and weapons, like the Q-Claw, Q-Decoder, and Bond's trusty Walther handgun. There is a large variety of missions, and Bond can go through most missions with weapons, or take a stealthy approach. The player is also rated in each level, based on score and difficulty level, and can unlock new features for both single and multiplayer.