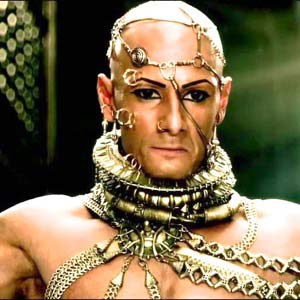 Overview... god-king of the Persians. Xerxes leads an army of over 300,000 into the Greek land of Sparta. The Spartan King Leonidas faces off against the Xerxes and the Persians with a tiny but eager army of 300 Spartans. Xerxes is certain that he will crush Sparta’s small army, but Leonidas vows to fight to the last man standing.

Personality… divine, ruthless, and greedy. Xerxes wants allegiance from Sparta, but Leonidas will bow to no king. Xerxes is flanked by swarms of zealots, who idolize his power and worship him like a god. Xerxes maintains that he is immortal, but Leonidas is sworn to prove otherwise.

Xerxes's popularity ranking on CharacTour is #4697 out of 5,600+ characters. See our top-ranked characters and read their profiles.