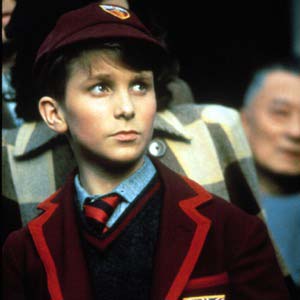 Empire of the Sun

Grew Up… as a privileged British schoolboy. When his parents moved to the Shanghai International Settlement, Jamie was doted upon and given an upper-middle class upbringing— until World War II came along.

Living… without his parents, trying to survive the Japanese invasion. Initially, Jamie followed his mother’s request to wait at his parent’s house. But life at the abandoned house soon becomes frightening and desolate. Without food or supervision, Jaime realizes that he has to figure out how to take care of himself.

Profession… student. Jamie was still learning the basics of reading, writing, and mathematics when he was suddenly thrown into the unforgiving world of war. Developing streets smarts will prove to be far more important now.

Challenge… surviving the war and reuniting with his parents. While doing so, Jamie faces lonely days, dangerous streets, and avoiding conmen– like Basie, a sailor who tries to exploit him (and maybe even sell his teeth). However, in the process, Jaime grows significantly. He eventually admits to Basie, “You taught me that people will do anything for a potato.”

Personality… spoiled and prissy— until he has to survive on his own. In the midst of war, Jaime’s innocence quickly disappears, and he becomes much more resourceful and mature, who can bear any challenge.

Jamie Graham's popularity ranking on CharacTour is #4750 out of 5,300+ characters. See our top-ranked characters and read their profiles.