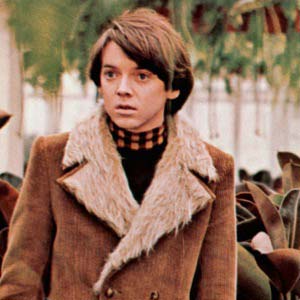 Living… in his mother's lavish house in the San Francisco Bay Area- just Harold and her. She dolled up the house just to her liking. To Harold it’s nothing but vanity, vanity, vanity. He can't wait to leave.

Profession… student. But his other full time profession is thinking about death. Harold’s obsessed by death; he thinks of nothing else. He even attends the funerals of perfect strangers, just to get a feel of it, to understand death as much as he can. It was at one of these funerals that he met Maude– a woman who is 79-years-young with a peculiar and refreshing zest for life. Now Harold spends most of his days enthralled by their adventures and her unconventional wisdom.

Interests… terrifying his mother. He pretends to kill himself any chance he gets. He likes to spoil her fancy dinner parties with his fake suicide attempts. When Mrs. Chasen’s had enough, she sends him to counseling. There’s more to it than simply terrorizing her, though. Mainly, Harold wants her attention. He also sees his psychotic tendencies as the perfect way of avoiding the Vietnam draft. When Uncle Victor, his uncle and psychiatrist, tried to persuade him to join the armed forces, Harold feigned interest and with Maude’s help tricked Uncle Victor into abandoning any hopes of Harold joining the military.

Relationship Status… completely blossoming since he met Maude. Before Maude, Harold was constantly being forced onto dates with boring girls his own age, hand-selected by his mother. Harold would invariably alienate and terrify these girls with more suicide attempts. With Maude, such tactics are unnecessary. She not only embraces him, but she also betters him. He doesn’t care if she’s older; he thinks age is a silly way to think about people. He makes her feel like a schoolgirl, and she makes him feel like a man that matters. Predictably, nobody gets it.

Challenge… realizing that his relationship with Maude is probably doomed. Like it or not, Maude’s age is a factor they both have to deal with.

Personality… macabre and eccentric with a soft and romantic side. Harold is a serious young man who is learning to loosen up and enjoy life now that he met Maude. She is the best thing to ever happen to him. Although they are romantically involved, Maude also serves as the mother that Harold never really had. Or rather maybe she’s the grandmother he never had.

Harold Chasen's popularity ranking on CharacTour is #1795 out of 5,600+ characters. See our top-ranked characters and read their profiles.