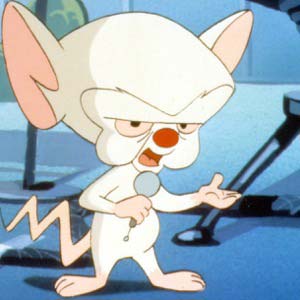 Pinky and the Brain

Overview… genetically engineered mouse supergenius. Brain (which stands for “Biological Recombinant Algorithmic Intelligence Nexus") lives in ACME Laboratories along with his excitable, dim-witted friend Pinky.  Every night Brain conceives and sets into motion a plan to take over the world. World domination is his singular goal in life; failure is not an option. Unfortunately, failure is the perpetual outcome.

Personality… sarcastic, irritable, relentless, and hyper-eloquent. Brain holds himself in high esteem and views his potential world domination as in everyone’s best interest, not merely his own. He would rule Earth as a sort of benevolent despot, beloved by all (maybe). Brain is generally disdainful of Pinky’s vacuous gaiety, but deep down he cares for Pinky, who at the end of the day is his only friend.

Brain's popularity ranking on CharacTour is #1370 out of 5,600+ characters. See our top-ranked characters and read their profiles.