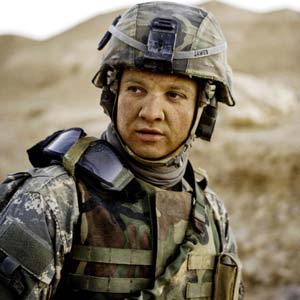 Living… amidst war. Sergeant First Class William James has recently relocated to a new post at Camp Victory, the large allied base built around Baghdad Airport during the United States’ military occupation of Iraq.

Profession… explosives unit team leader. Jame is a specialist in detecting and disarming bombs and other improvised explosive devices. His position was vacated when the previous team leader was killed while trying to disarm an explosive device.

Interests… alcohol, roughhousing, and anything that gets the adrenaline pumping. James craves a lack of control, and is relaxed and jovial during activities that most people would consider stressful, like disarming bombs and getting into fist fights.

Relationship Status… married with an infant son. They both live back in the states. This distance stays even when he returns home on leave.

Challenge… staying in one piece. Not only does his job require him to stand inches away from live explosives on a routine basis, it also places him in command of a group of soldiers who each deal with their own fears and struggles. Sergeant James has to stay at the top of his game to diffuse both bombs and tensions between team members.

Personality… tough and rowdy. Sergeant James is the sort of man that was made for war. He’s a thrill seeker, who takes big risks and thrives off close calls. His ability to remain at ease in unbelievably tense situations makes him perfect for his job, and also makes him hard for others to relate to. Seemingly flippant and care-free, Sargent James actually forms deep bonds with the people around him. Beneath his easy-going demeanor, he’s actually conscious of how reckless he can be, which he tries to remind himself of in order to remain grounded. He tells himself, “This box is full of stuff that almost killed me.”

William James's popularity ranking on CharacTour is #3614 out of 5,300+ characters. See our top-ranked characters and read their profiles.