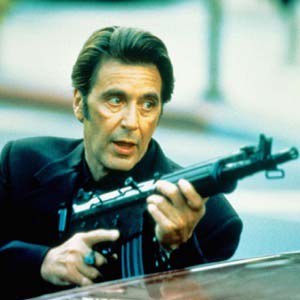 Living… in his office and on the streets day and night. When he needs to shower or eat a good meal he goes to the hotel where he’s staying since he moved out of his house. He’s not even welcome in his own home anymore – or rather it doesn't feel like “home” anymore.

Profession… lieutenant for the L.A.P.D. Hanna and his men have put master thief Neil McCauley under 24-hour surveillance, title search, the works. They’ve bugged his car and done whatever else they need, even if it won't be necessary. When McCauley moves or sits, the police know about it. Vincent wants pictures of who he moves and sits with.

Interests… trying to keep his step-daughter out of trouble. His stepdaughter's got problems because her real father's a world-class deadbeat, and every moment Vincent has, he’s chasing guys like McCauley and his crew. Vincent’s wife spends half her time on the couch and couldn't care less.

Relationship Status… looking grim. His wife, Justine, was sleeping around and Vincent moved out. He’s not sure if he can even blame her. They’d grown so distant, especially when he took on the McCauley case. Little things now and then remind him how much he loves her. But that may not be enough at this point.

Challenge… nailing McCauley for a felony like he deserves. So far Vincent’s got nothing. McCauley is so careful that he’s managed to slip away from every well-laid trap, time and again. But Vincent is relentless, and he will not stop until he brings down his man – or McCauley sneaks out of the country.

Personality… stressed-out. He loves playing cops and robbers but in the end, he’s just a regular Joe. He does what he has to do, just like McCauley does what he has to do. But if it’s between Vincent and some poor bastard – i.e. a bad guy – whose wife Vincent is going to make into a widow, he’s going to take the criminal down without thinking twice. And McCauley will do the same to Vincent, as they both know. Actually, Vincent has a kind of respect for McCauley as a fellow professional, but they are on opposite sides of the law and that’s a gap that can’t be bridged.

Vincent Hanna's popularity ranking on CharacTour is #2714 out of 5,300+ characters. See our top-ranked characters and read their profiles.