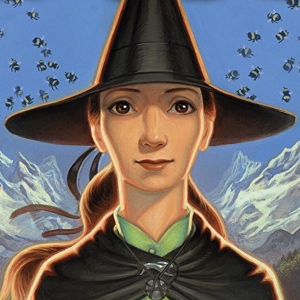 Grew Up... on stories of her grandmother. Known for both her skill with sheep and her great wisdom, Granny Aching may be recently deceased, but she is still greatly respected by both her community and her granddaughter.

Living... in the rural and hilly Chalk, in a small agrarian community that doesn't take well to witches. In fact, several years ago, an old lady thought to be a witch had her cottage torched – hardly a welcoming environment for a budding young witch. For that very reason, young Tiffany is determined to become a witch, precisely "so that sort of thing doesn't happen again."

Profession... witch-in-training. Tiffany is also a shepherdess and an expert cheese maker. Beyond her familial duties, Tiffany must aid her community as their resident witch. Tiffany also befriends the Nac Mac Feegle, a clan of crass and violent fairies who become her steady allies.

Interests... helping others, witchcraft, and knowledge. Despite still being a child and growing up in an isolated community, Tiffany has picked up an impressive store of knowledge from dictionaries and traveling librarians. As she retorts to an adult, "Patronizing is a big word. Zoology is really quite short.” Although her seriousness sometimes makes it difficult for her to make friends, Tiffany's common sense and bravery quickly win her respect from her peers.

Relationship Status... single. The Baron's son, Roland, seems to take an interest in Tiffany, especially after she saves him from the Queen of Fairies, but he's also kind of a twit. A well-meaning, maybe-sort-of-attractive twit, but a twit nonetheless. Then again, Tiffany is only9.

Challenge... developing her witchcraft while fighting the stigma against it. As a competent and helpful member of her community, Tiffany is largely accepted by the people Chalk. But old prejudices have long lives, and fighting them proves to be more than enough to occupy a young witch-in-training. And that's not even taking into the account the Chalk's nasty habit of attracting otherworldly visitors...

Personality... thoughtful, observant, and responsible. While those around her are content to live by old customs, Tiffany refuses to follow tradition for the sake of tradition. As she puts it, "Stories don't want you to think, they just wanted you to believe what you were told." It is precisely this streak of independent thought that gives Tiffany – though still a young girl – the potential to become a powerful witch.

Tiffany Aching's popularity ranking on CharacTour is #2351 out of 5,300+ characters. See our top-ranked characters and read their profiles.