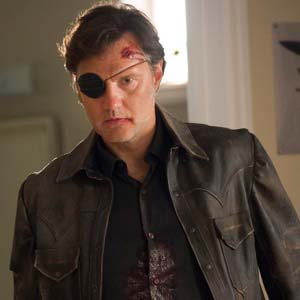 Living... in the abandoned town of Woodbury with a few loyal followers. Why are they so loyal? Well, if they hold him back, they’ve got a bullet coming their way. The Governor loves power and has no time for anyone, alive or undead, to get in his way.

Profession... Governor, leader, iron fist wielder. He saw the apocalypse as an opportunity, and his magnetic personality drew people to him who were looking for hope in a bleak environment. But once they joined him in Woodbury, glimpses of his volatile nature came out. But who would be brave enough to rise up against him? It might be safer to just stay by his side.

Relationship Status... widower, though unlike many of his followers, his wife died before the outbreak. He keeps his past as mysterious as possible, never letting anyone in to see a vulnerable side of his personality. All he has from that relationship is his daughter Penny, but she’s not in great shape…

Challenge... keeping his daughter Penny as close to human as possible. She was bitten and is currently a walker, but he keeps her in a closet and brushes her hair, hoping one day he’ll be able to cure her. But his other challenge hopes he never gets to see that day – Rick and his group want to overthrow his reign. It’s their only hope of staying alive.

Personality... manipulative and power-hungry. He’s violent, aggressive and completely remorseless in his actions. Any sanity The Governor had before the apocalypse is long gone, and now he poses just as much a threat to those around him as the walkers he claims to protect them from.

The Governor's popularity ranking on CharacTour is #1912 out of 5,600+ characters. See our top-ranked characters and read their profiles.