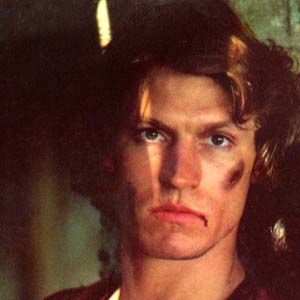 Grew up… fighting for his life. New York City has been carved into neighborhoods that are ruled by vicious gangs. In an effort to protect himself from the constant violence, Swan joined Coney Island’s most formidable gang, the Warriors.

Living… in Coney Island, Brooklyn, the Warriors’ territory. Just about every street in New York is under some gang’s control. Surrounded by a hostile city, Coney Island is the only place that is truly safe for a member of the Warriors.

Visiting… Van Cortland Park in the Bronx. Swan and the Warriors have travelled to the northernmost tip of the city in order to hear out a rival gang leader named Cyrus. He’s invited every gang in the city to hear his plan: initiate a city-wide truce, allowing the gangs to stop focusing on fighting each other, and start focusing on ruling NYC.

Profession… new leader of the Warriors. Cyrus’ peace summit descended into violence when a member of the Rogues assassinated Cyrus and framed the Warriors, resulting in the swift death of their leader. Now it’s up to Swan to guide the surviving Warriors back to Coney Island before every gang in the city catches up to them. In addition to threats from outside the group, Swan must also deal with the violent Ajax, a fellow Warriors member who aspires to the top spot.

Challenge… surviving the long night ahead of him. Wrongly pegged as Cyrus’ assassin, the Warriors have drawn the attention and ire of every gang in the city. They’ll have to travel miles and fight their way through gang after gang if they hope to make it back to their home turf. The pressure is particularly intense for Swan, who, as the new leader of the gang, is responsible for getting everyone home safe. But with 60,000 gang members gunning for them, it’s going to take a miracle to get everyone to Coney Island in one piece.

Personality… quiet, stoic, and calm. Swan prefers to let his actions speak for him. While he’s not outwardly menacing, his eyes burn with a quiet intensity that can cow even the bloodthirsty Ajax. Smart, and prioritizing the gang’s survival over his pride, Swan is willing to do whatever it takes to get his street-soldiers back to Coney Island alive.

Swan's popularity ranking on CharacTour is #5205 out of 5,600+ characters. See our top-ranked characters and read their profiles.