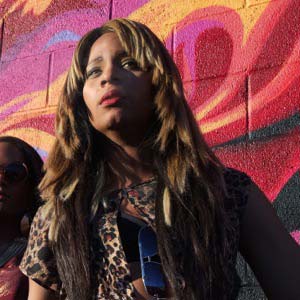 Overview... a trans woman on a mission. After getting out of a short stint in prison, Sin-Dee Rella is devastated to learn her boyfriend/pimp Chester has been cheating on her – and with a non-trans woman, no less. So she and her best friend Alexandra set out on an epic Christmas Eve journey across L.A. to confront Chester and shame this mysterious other woman.

Personality... fiery, argumentative, and no-nonsense. Impulsive Sin-Dee Rella leaps before she looks. Chatty and confident, she snaps back when she’s been wronged and leaps into action when provoked. She can be aggressive, single-minded, and a little rude – not to mention, physically confrontational – in pursuit of a goal. But Sin-Dee Rella also has a softer, more vulnerable side she prefers to keep hidden.

Sin-Dee Rella's popularity ranking on CharacTour is #5031 out of 5,600+ characters. See our top-ranked characters and read their profiles.