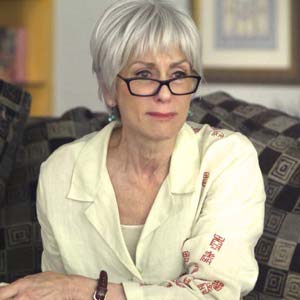 Living… in beautiful Los Angeles, where she raised her three children with her ex-husband Mort. After their divorce, Mort kept the house in the Palisades, while Shelly moved to a condo in a retirement community with her new husband.

Profession… loving, overbearing Jewish mother and grandmother. Yes, that is a profession. Making sure everyone gets the right schmear with their bagels is a job in and of itself, along with following all the details of her children’s lives and controlling them to the best of her ability.

Interests… good food, good culture, and her family. Shelly is very involved in the synagogue, evading being the subject of gossip among congregants just as much as she spreads the gossip herself.

Relationship Status… married to her second husband Ed, who suffers from dementia. Shelly loves Ed, but of course having a sick husband can be a bit burdensome. When Ed goes missing, who can blame Shelly for caring more about what the ladies at the temple will think about all of it than about Ed’s safety?

Challenge… taking care of her husband and coming to terms with her ex-husband’s coming out as a trans woman. She knew about Mort’s issues with his identity for years – those issues led to their divorce. But of course, now that Mort has publically become a woman named Maura, it’s a totally different story and Shelly needs to deal with that.

Personality… chatty and intrusive, yet guarded. She wants to be there for her children, but sometimes the fact that she doesn’t directly address her emotions can get in the way of her being there for them in a real way. She cares about appearances and has learned to focus on how things look to others as opposed to the deeper stuff.

Shelly Pfefferman's popularity ranking on CharacTour is #4591 out of 5,600+ characters. See our top-ranked characters and read their profiles.