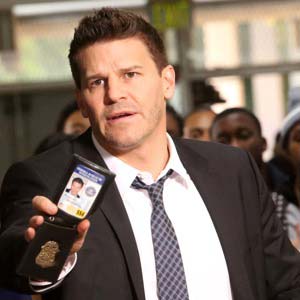 Living... in Washington D.C. after a few tours of duty overseas as an Army sniper. He’d rather not talk about the unpleasant memories of the kills he accumulated while fighting in the Middle East. Luckily many of his missions are classified, so his lips are sealed by government mandate.

Profession... FBI Special Agent. He’s a liaison to the Jeffersonian Institute, a center that specializes in forensic anthropology – using human remains as evidence in cases. Through this arrangement, he becomes close with Dr. Temperance Brennan, better known to Booth as “Bones.”

Interests… classic rock and a nice cup of black coffee. He’s a man who feels most comfortable staying away from technology and sticking with tried and true things that have stood the test of time – Foreigner, the morning paper, and other “dad” stuff.

Relationship Status... single, with many ex-girlfriends. He’s been around the world for his job and around the block in his love life. He is always running into an old flame ready to rekindle things. But he can’t help but notice there’s some romantic tension between him and Bones, and everyone else notices as well. Does he push her buttons just to annoy her or is there something more there?

Challenge... solving homicide cases for the FBI alongside the Jeffersonian team of forensic anthropologists. He often clashes with the scientists, who only listen to hard, empirical evidence even though he has years of field experience and a pretty good knack for reading people.  But though their methods differ, Booth and the scientists generally share the same goal and usually get their man (or woman).

Personality... charming, confident, and decisive. He follows his gut more than his partner, Dr. B, and trusts what he sees with his own eyes rather than what’s under a microscope. But he also trusts his partners, which is ultimately what he considers the anthropologists at the Institute. He’d take a bullet for any of them – especially Brennan.

Seeley Booth's popularity ranking on CharacTour is #1695 out of 5,600+ characters. See our top-ranked characters and read their profiles.