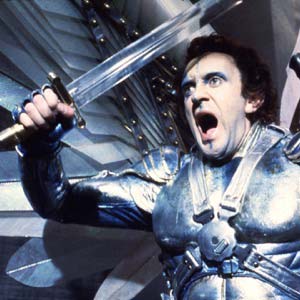 Profession… working for a government that's the very image of a dystopian bureaucracy. A sea of desks, fountains, statues, cameras, and video screens are recruited to monitor the citizens and “prevent terrorism." Sam’s just noticed an error in the system which led to an innocent man being executed. Now, he’s trying to get into a position where he can fix things from the inside. Problem is, that might lead to him being suspecting of terrorism, too.

Interests… daydreaming, though not always on purpose. Sam’ll be sitting at his desk and suddenly images come to him. As he describes one daydream, "Rotting, broken dolls' faces. All the faces are the same except for the manner in which they have decayed. Suddenly the robed bodies change shape, some rising up to become long, others expanding sideways to become bulbous, others shrinking.”  Something like that happens a few times every day or so.

Relationship Status… involved in a risky relationship. Jill was a neighbor of the man who was wrongly convicted, and she was labeled as a terrorist for trying to help him. This wouldn’t be Sam’s concern, but Jill is the same woman he’s been chasing in his daydreams for ages. He can’t just let her go now.

Challenge… avoiding suspicion from the very government agency he works for. The system is in charge of everything, and the slightest mistake can get you in deadly trouble. That’s what happens to innocent people— and what will they do to Sam, who’s actually trying to change things? Protecting himself and Jill is going to be nearly impossible.

Personality… cynical and fatalistic. Sam’s never been the most stable person, and the government thrives on stability. He’s efficient, but efficient against the forces that be. In these times, that translates to guaranteed doom. Still, things couldn't get any worse than they are now. He hopes.

Sam Lowry's popularity ranking on CharacTour is #2742 out of 5,600+ characters. See our top-ranked characters and read their profiles.