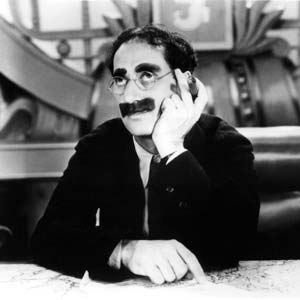 Living… in Freedonia, a small, European country in the 1930’s.

Profession… President and Dictator of Freedonia, an incredibly bankrupt country. Freedonia was so desperate for money that the government accepted $20 million dollars from a wealthy widow named Mrs. Teasdale. Her money had strings attached – Mrs. Teasdale insisted that the President step down and be replaced by the "fearless, progressive" Rufus T. Firefly. At his inauguration, Firefly made quite an impression. Insulting practically everyone, he proceeded to sing a song about how he plans to abuse his power.

Interests… making people laugh. Rufus is quite a joker and is full of double entendres, insults, and puns. Apparently, he also likes dancing and has some creative moves. As he says to a woman he met, “I could dance with you until the cows come home. On second thought, I'd rather dance with the cows ‘til you come home.”

Relationship Status… involved with Mrs. Teasdale. However, he seems to be using her almost exclusively for her money.

Challenge… keeping Freedonia safe. Neighboring Sylvania is looking to take control of defenseless Freedonia, and the Sylbanian Ambassador is trying to get any bit of damaging information he can find on him. Rufus suspects that spies may have even infiltrated his own cabinet.

Personality… hilarious, goofy, and irreverent. Rufus is a fast-talking rebel who is unafraid of saying what he thinks. He is unabashedly power-hungry and selfish, and yet still comes across as fun to be around.

Rufus Firefly's popularity ranking on CharacTour is #2476 out of 5,600+ characters. See our top-ranked characters and read their profiles.