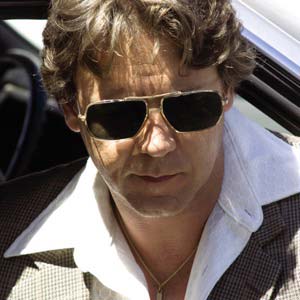 Living… through a heroin epidemic that seems to grow worse by the day. Roberts knows first-hand the kind of destruction that this new form of heroin — known as “blue magic” — can cause: it killed his former partner.

Profession… leader of a task force to discover major drug trafficking in Essex County, New Jersey. The police — at least, those who aren’t corrupt — can’t seem to figure out which organization is responsible for blue magic. It’s Richie’s job to find out.

Interests… maintaining his professional integrity and ignoring his marital integrity. Richie prides himself on being an honest cop, and proves his dedication to his professional scruples when he refuses to skim from a $1,000,000 bust. He never takes kickbacks or bribes, but, as his wife says, he’s dishonest about everything else.

Relationship Status… having trouble with his marriage. Richie’s wife, Laurie, has never been satisfied with her husband’s modest income—nor has she taken kindly to his cheating.

Challenge… to pursue an unlikely lead and convince his superiors that he’s close to discovering the source of the drug epidemic. Richie knows that a relatively unknown man, a black mobster named Frank Lucas, is responsible for importing blue magic. He claims that, “Frank Lucas is the most dangerous man walking the streets of our city.” Still, it’s going to take more than a hunch to convince the higher-ups that the unprecedented volume of drugs is the result of one nobody, and not the work of the Italian Mob.

Personality… tough, smart, and relentless, Richie may be the only cop with a hope of taking Lucas down. Richie knows just how corrupt his colleagues are, and accepts his status as a pariah within the department. He’s a unique blend of realist and idealist — simultaneously aware of the realities that drive and perpetuate the drug trade, and committed to the impossible task of stopping it once and for all.

Richie Roberts's popularity ranking on CharacTour is #3872 out of 5,300+ characters. See our top-ranked characters and read their profiles.