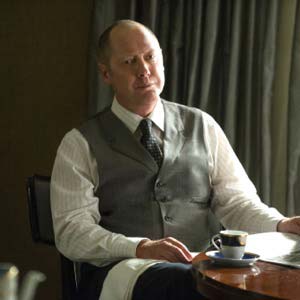 Grew up… as a precocious young man. Raymond (or "Red") has always been ferociously intelligent. He was a star at the Naval Academy – he was groomed for the position of Admiral, in fact – until he disappeared over 20 years ago.

Living… off the grid. Raymond is stateless, homeless and constantly on the run. He has no true allegiances – except to the highest bidder. A criminal like Red only cares about business.

Profession… international criminal mastermind. Red is nothing less than the maestro of the criminal underworld, capable of influencing the highest levels of finance, industry, and government. Number four on the FBI’s Most Wanted list, they call him “the concierge of crime.”

Interests… nice clothes, fine wines, and haute cuisine. Raymond is not your average criminal. He prefers the best hotels and the driest champagne.

Relationship Status… single. Raymond was once married, but he allegedly abandoned his wife and child many years ago. The last time he saw them was Christmas Day 1990.

Challenge… maintaining control in his new relationship with FBI Agent Elizabeth Keen. One day, Red walked straight into FBI headquarters and gave himself up. In exchange for good treatment, he’s offered to give up his list of criminal contacts – “the blacklist,” as he calls it. Yet Red always keeps his motives mysterious. No one knows why he’s so eager to work  specifically with Agent Keen, a  relatively low-level profiler.

Personality… sly, manipulative, and charming. Red is always three steps ahead of everyone else, and is determined to keep himself a mystery. As he puts it, “I’m a criminal. Criminals are notorious liars. Everything about me is a lie.” That’s probably true, actually, but who knows for sure.

Raymond Reddington's popularity ranking on CharacTour is #1739 out of 5,600+ characters. See our top-ranked characters and read their profiles.