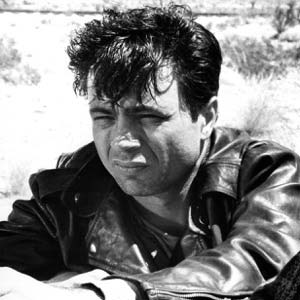 Overview… a guy who needs to catch a break. A merchant marine who served in the Korean War, Perry got in a disastrous motorcycle accident that left him with a pair of half-useless legs and a painkiller dependency. A few years later, after a brief stint in prison, he gets a letter from his jailyard friend Dick, whom he admired, asking if he wants to assist him on a $10,000 robbery out in west Kansas. Eager to fund his treasure-diving trip in Mexico, Perry accepts Dick’s offer.

Personality… earnest, idealistic, and soft-spoken. Perry hardly cuts the figure of an alpha male. Indeed, an abusive childhood left him meek and withdrawn, and the motorcycle accident left his short frame that much less imposing. A voracious reader, he endeavors to lead a life of the mind, to venture past the limits of his third-grade education, to dare to dream. But he has fallen into a life of crime from which he might never escape – especially if he escalates it himself.

Perry Smith's popularity ranking on CharacTour is #3733 out of 5,600+ characters. See our top-ranked characters and read their profiles.